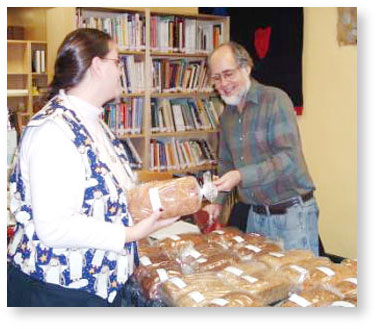 In 1991, the K-W LETSystem was formed by a group of local citizens interested in community economic development. Their interest grew from a trade network based on the Local Exchange and Trade System (LETS) developed in 1983 by Michael Linton in the Comox Valley of British Columbia.

As an unemployed computer programmer with an interest in community economics, Linton saw that many people were in a similar position: They had valuable skills they could offer each other but had no money. He also saw the limitations of a one-on-one barter system: If a plumber wanted the services of an electrician, but the electrician didn't need plumbing help, the transaction couldn't take place.

Steadily membership grew and grew and in 1995, to attract more members, the K-W LETSystem was renamed BarterWorks. By 1996 over 100 individuals, businesses and organization had joined BarterWorks. Everything from accommodation, car repair, food, home renovations, arts and crafts and dozens more services became accessible through BarterWorks trading and BW was seeing over $B350 worth of trades each month.

Despite many early problems in such areas as organization, computer software, resource management and time constraints of volunteers, the BarterWorks community has held together and, having addressed and learned from these problems, is far stronger as a result. Our increasingly sophisticated organization and procedures have produced a shift towards a more business-oriented system, which has been well received by members.

Being based on the proven LETSystem, BarterWorks joins the ranks of hundreds if not thousands of such systems that operate in communities all over the world; in Australia, Europe, and North America. BarterWorks trades up to $B60,000 in local currency annually. The Globe and Mail has commented that "Trading goods and services has gone from a fringe activity to a bubbling mini-economy." Clearly, a great deal of potential exists with these systems.

Historically, LETSystems tend to grow during hard economic times, and shrink when the economy recovers. Local currency systems became common during the Great Depression, saving many communities the world over from utter poverty and destitution. The economy is controlled locally In a LETS community, so a strong local currency can in fact prevent recession resulting from weakening national or global economy, keeping people working when big business leaves town.

MAYORS DINNER REIMAGINED FOR 2021
The Mayors' Dinner has a wonderful 32-year history of recognizing and celebrating individuals and stories of community...
March 2021 Issue of Good Work News
The March issue of Good Work News features articles on... • Changing Our Relationship to the Living World • The...
Humanities 101 Free University Course
Humanities 101 Free University Course – Call for Applications Renison University College will be offering a free 12-...
Updated 02/23/21: Worth a Second Look open limited hours
As of April 7, 2021, Worth a Second Look is closed to the public due to Covid lock-down. Donations may be dropped off...
Free Income Tax Clinic at The Working Centre
The Working Centre’s Free Income Tax Clinic will operate as a drop-off only and will open on Monday, March 2nd. ...
END_OF_DOCUMENT_TOKEN_TO_BE_REPLACED