St. John’s Kitchen is a place that people feel belongs to them. This is because its culture grows out of the values of people who gather there – and there is a strong recognition that the cultural norms and values that people live by are vital supports to them. Services offered by agencies are a complement to these cultural supports.

It is an important reality that t 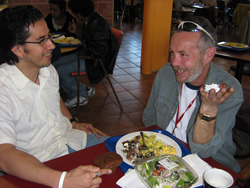 he local street culture remains strongly relevant for people gathering at St. John’s Kitchen who are housed. When people belonging to street cultures enter housing situations that separate them from their culture, they often experience depression, isolation, and loneliness. This is because cultures play an irreplaceable role in providing support to their members and helping people make meaning out of life. Just like belonging to any culture, belonging to a street culture is not a socioeconomic circumstance – it is a way of understanding the world.

The philosophical framework of St. John’s Kitchen means that the elements of the local street culture reflected there are positive ones. There are also negative issues impacting the community that identifies with this culture – such as petty crime, substance use, volatile behaviour, and stigma from those outside the culture. These issues exist in complex intersections between mainstream cultures, street cultures, and individual experiences.

In many ways, the local street culture is born out of people’s experiences of dislocation within mainstream free-market culture ─ and in response, it has evolved to nurture qualities such as freedom, personal resilience, and strong levels of mutual support. These elements support people who belong to the culture to build a sense of belonging to a close community, balanced by a sense of personal freedom and fulfillment (some of the language we are using to describe these ideas is influenced by Bruce Alexander and his book, The Globalization of Addiction: A Study in Poverty of the Spirit).

As a place where these qualities thrive, St. John’s Kitchen nurtures people to be fully themselves within the irreplaceable supports of their own culture and community. When people are honoured and supported as whole and complex individuals, they are more able to maintain stability and fulfillment in life. It is within this context, as a complement to the cultural supports of St. John’s Kitchen, that focused services are provided by different agencies to follow people in their unique needs.