The Many Sides of Ron Schlegel 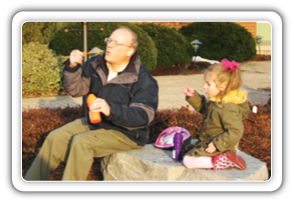 Ron Schlegel is like a polygon: he has many sides.

This year’s Guest of Honour at the Mayors’ Dinner has led a remarkably active life as a professor, philanthropist, community leader, business owner, farmer, land developer, husband, father, grandfather … There are too many roles to count. All of those facets of Ron’s life have a common thread: using one’s talents and resources and working with others towards a common goal, to create a better community.
Ron has certainly made his mark on the community through avenues such as the retirement/long-term care residences of Schlegel Villages, shaping neighbourhoods in KW through Schlegel Urban Developments, and developing innovations in care through the Schlegel-University of Waterloo Research Institute for Aging (RIA).

Though Ron has been recognized more than once for these many accomplishments - he was granted an honorary Doctor of Laws degree from UW in 2005, and named an Officer of the Order of Canada in 2012 - he says he has “just tried to make the world a better place” through hard work, collaboration and innovation. 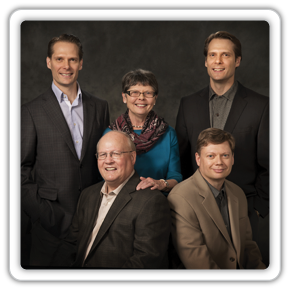 Ron credits his success to the values he learned early in life from his family and community. Born in Punkeydoodles Corners 70 years ago, he was the son of a farming and business family. His father, Wilfred Schlegel, was also a Mennonite minister who believed strongly in taking on community responsibilities - a characteristic he instilled in his son. His father also had a creative mind which led to many innovations and community developments.

Ron began managing his dad’s five farms while still in high school; he went on to buy his own first farm at age 21 when in university. It was also during his high school career, two years of which he spent at Rockway Mennonite Collegiate in Kitchener, that he met Barbara Becker, who would marry him and become his lifelong partner.

Wilfred also ran a small nursing home, where Ron worked helped out as a youngster while in grade school. It was there that he first got interested in the dignity and welfare of seniors, which would have a major influence on Ron’s career and life direction. He attained a B.A (Hon) at the University of Western Ontario, M.Sc. from the University of Illinois, and a Ph.D. in social psychology from Ohio State University. 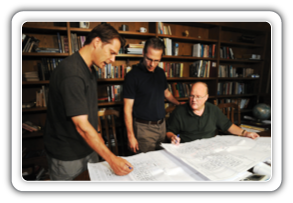 He researched how environmental factors affect people’s behaviour. He applied this in the area of addictions for his doctoral dissertation and later to the field of aging. It was while he was a graduate student that Ron bought his first nursing home.

Agriculture operations continued and expanded, as Ron acquired additional farms, producing cash crops and establishing chicken and turkey growing operations west of London. The land development projects began with some modest developments in Kitchener, and eventually grew to  include the Williamsburg Town Centre, based on the concept of a village, designed to maximize social interaction and a sense of community.

Other life events had a major impact. Barb had a stroke at age 39, which started a continuing journey of recovery. Ron and Barb raised three sons, Rob and twins Brad and Jamie. It’s evident when Ron  speaks of his sons that he is immensely proud of them.

All three sons are active in RBJ Schlegel Holdings Inc., the umbrella for the various business ventures. Rob and Jamie are both CA’s by training. While Ron is the Chairman, Jamie serves as the President/CEO, Rob is the CFO and Brad is Vice-President of Design and Construction. Brad returned to the company a few years ago, after a professional hockey career that included time in the NHL with the Washington Capitals and Calgary Flames, as well as playing on the silver medal-winning Canadian men’s hockey team at the 1992 and 1994 Winter Olympics and was Captain of the 1992 team in Albertville, France. 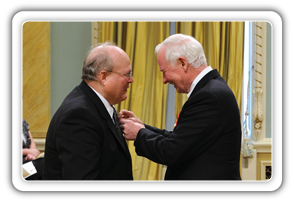 Ron is confident the family business will continue well in his sons’ hands. “They are all capable, and have their own specific areas of expertise,” he says. “It makes it a lot easier when their abilities complement each other.”

The Schlegel Villages are a central component - and perhaps the most visible part - of Ron’s endeavours. From Windsor to Whitby to Barrie there are fourteen long term care and retirement continuum-of-care facilities already open or in the works, including The Village of Winston Park in Kitchener and a soon to be started research and teaching complex on the North Campus at the University of Waterloo.

The goal is to provide homes where seniors can live in dignity and comfort, where they can still be a part of a community. “It’s important to live a lifewith purpose until the very end. We seek to provide an environment where that’s possible,” says Ron. Design is an important part of that. Bringing together his academic expertise about behaviour and environment with his experience creating livable urban environments, Ron has always championed the idea of a village. One of the company’s publications, “Transforming The Continuum Of Care Into A Village” outlines the main features of the concept: 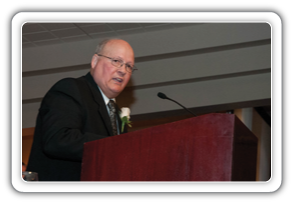 The Village design borrows from new urbanism design principles (for town planning) to create three levels of social experience, just as in the general community:

The evolution of this model continues, informed by research and feedback from residents. Ron has always derived much satisfaction from speaking with seniors and their families. He says they have taught him as much as he has ever learned at university. 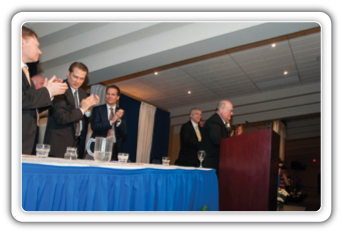 As his many projects grew, Ron found himself busier than ever. He stepped away from his role as professor at UW in 1991 to focus on business operations, but that certainly did not mean the end of his relationship with the university. In 2005, he committed several million dollars to establish the Schlegel-University of Waterloo Research Institute for Aging (RIA), to create specialized research chairs and provide infrastructure funding for the Institute. Conestoga College participates as a core workforce development partner. It proved to be a huge step for supporting innovation within an integrated continuum of care for seniors, fostering multidisciplinary avenues of research and development of best practices.

The citation for his honorary degree summed up this alliance: “As a visionary in all dimensions of life, Dr. Schlegel is not content with ‘what is’ but strives for ‘what can be’. To that end, the many retirement and long-term care facilities that he built across Ontario represent an innovative model of continuum of care for older adults. In partnership with UW, he crafted the unique Research Institute for Aging which transfers research directly into quality of care and quality of life for long-term care residents on-site.”

The “Schlegel Model” of research focuses on “incubation, acceleration and dissemination for innovation” and harnesses the resources and expertise from UW, Conestoga College, Schlegel Villages and other partners. There are incubator sites at the UW campus (research and training); Winston Park & Williamsburg Town Centre in Kitchener (extending the continuum-of-care to those living in the general community); Riverside Glen and Homewood in Guelph (therapeutic care innovations). There are research partnerships with the University of Guelph (nutrition and aging), University of Western Ontario (vascular aging, dentistry and oral health), and McMaster University satellite campus in Kitchener (geriatric medicine). Satellite colleges in other parts of the province that provide training include Sheridan, and St. Clair. 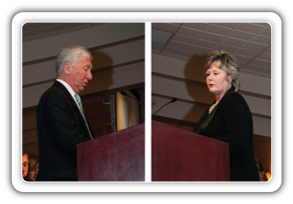 The Schlegel family’s recent acquisition of Homewood Health Centre and Homewood Human Solutions created new opportunity to extend the research-to-practice paradigm to include addictions and mental health, and Ron quickly moved in that direction by revitalizing and expanding the Homewood Research Institute.

A significant portion of the sustainability of the RIA comes from continuing support from the Schlegel businesses. Ron firmly believes that he and his family can provide greater support to the Institute through further contributions rather than creating an endowment. “We can leverage our business and talents to create more cash flow to support this endeavour. A philanthropy component is built into each business model,” he says.
Ron has not limited his contributions to RIA.  He has also supported Mennonite Economic Development Associates, House of Friendship, Habitat for Humanity and Grand River Conservation Foundation projects. He created the Wilfred Schlegel Memorial Fund, in memory of his father, to support “visionary” and “risky” social enterprises to foster community.

His modeling of generosity has rubbed off on others as well, in his family and throughout the company. His nominators for the Order of Canada recognition set it out in some detail:

“Ron lives his vision for a better world every day. He marks every day with acts of kindness - in his professional, community and personal life. He has instilled the same values that guide his own life in his three sons, all of whom are leaders in their own right, participating in the various Schlegel enterprises, and giving back their time and resources to worthy social and community projects.

“Through his academic career, Ron has touched the lives of thousands of students, and personally guided and inspired hundreds of them. In addition, the values that guide the Schlegel family are modeled and promoted throughout the workforce of over 4,000 staff working in various Schlegel enterprises.

“For example, with support and leadership from Ron and his sons, a team of staff from the Schlegel Villages participated in the Weekend to End Breast Cancer for four years in a row, raising more than $250,000 for Princess Margaret Hospital. An annual Hand Up for Haiti fun run and community event raised over $60,000 in its first two years to provide a ‘hand up not a hand out’ to aid victims of the devastating earthquake in Haiti.”
For Ron, it all comes back to that model of building a caring, interconnected community coming together in a village square - perhaps the most meaningful type of polygon.

Back to Mayors' Dinner Guests of Honour

Working Centre Closures
As of Tuesday March 17th, The Working Centre will be limiting public access spaces across our network of projects in...
Welcome to the 2020 Virtual Mayors' Dinner
Dear Friends, For the first time in 33 years we cannot gather for the Mayors' Dinner because of the COVID-19...
April 2/2020: All income tax appointments are currently cancelled
The Working Centre’s Free Income Tax Clinic is closed for the time being; unfortunately we are unable to book any...
Updated: Humanities 101 Free University Course
Update - Due to COVID-19 Humanities 101 will be an online class this year. We are still receiving applications for the...
March Issue of Good Work News
The March issue of Good Work News features articles on... • 33rd Annual Mayors’ Dinner Saturday March 28th 2020 •...
END_OF_DOCUMENT_TOKEN_TO_BE_REPLACED