Transforming 58 Queen St. South and the Process of Revitalization 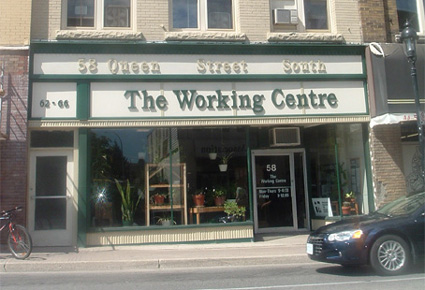 Our building at 58 Queen Street South is transformed. Renovations officially started on the weekend of December 12. Bookshelves and offices were emptied in anticipation. We had imagined how the Centre could look given the evolving way the building was being used.

On Saturday morning, bright and early, the first smash of the crowbar indicated something exciting was happening. After a great deal of work about 800 square feet of drywall had been carted out the back door and to the dump. Our task was to find the beauty of our building that had been progressively covered since it was built in 1905.

When the walls had been cleaned up our giant front entrance emerged and the full dimension of the building became apparent including the 16 foot ceiling that is 75 feet long and 25 feet wide.

The goal of our project was to open up the space, make it brighter, get rid of the clutter, accentuate the details of the old building, and make it more functional for the uses that have evolved.

The renovations would not have been possible without Peter Moberly's volunteer commitment to think through the project and then to follow through on the hundreds of details to make it all come together.

Our approach to the renovations in December 1997 was not unlike our first attempt in November 1985. We had recently rented 58 Queen and we worked through the month of December in order to open on January 2nd 1986. The Ministry of Skills Development had recently awarded The Working Centre and other unemployed help centres that were supported by Labour Councils and the Ontario Federation of Labour, the Help Centre program which was designed to provide services to unemployed adults. This new Ontario government initiative was a welcome relief after four years of developing such services with few ongoing resources.

At that time Chris Mockler, Greg Shantz and Joe Mancini lead a team of volunteers to recreate the 1st floor and basement. We built a number of offices, made the basement useable and repainted the interior. In retrospect, we added to 58 Queen's usefulness but barely noticed and covered over much of the buildings beauty.

We approach renovations with a healthy and proper fear of the reality that costs can escalate out of control and we attempt to do the majority of the work ourselves. It is partly recognition that whether we own the buildings or not, functional space that adds a sense of dignity is highly important to the work that we do. Therefore, it is worth harnessing the resources of our organization at the expense of other activities to get the job done. This means all hands dedicated to finishing the job.

The same is true in regards to how we financially manage these renovation projects. In most cases drywall and paint is relatively cheap. We have been fortunate to receive government support through the Ministry of Skills Development or HRDC plus foundation grants such as the Ontario Trillium Foundation and private donations. Our organization has focused our resources on revitalizing these Queen Street buildings into mixed-use projects filled with diverse activities. These revitalized buildings are a rich community resource that has been made possible through a frugal administrative structure and hard working volunteers and staff. The work of self-building means breaking down the renovation tasks and training people to do the work that most organizations would rather hire out to a contractor. Our projects are more like a Habitat for Humanity build where we maximize the use of volunteer spirit by:

The main floor of 58 Queen is now a bright and open expanse of space with a dark green tin ceiling, original red maple wooden floors, new counters, work tables, and cafe tables strategically placed to ensure maximum work and meeting space. With the computers, phones, newspapers, tables, and library, it has the look of a café with a purpose. It offers a bright modern look while still emphasizing the unique features of our 100 year old building.

The basement was completely gutted and electrical, plumbing, heating and sprinkler services were added or changed. In the front area the Mennonite Coalition for Refugee Support now has a fixed up and brighter office and an expanded reception area with ceramic tiles, renovated washrooms, and a new kitchen area with cupboards, a dishwasher and sink. The back meeting room was also completely reworked. It is now a bright room with closets designed for the sewing project. A proper back entrance fire exit was added.

On the second floor our administration area was also transformed by changing a door, extending a floor transition and taking out the carpet and sanding down the old red maple hardwood floor. The final result is a bright workspace with a loft like character.

On the other side of the second floor we opened up what we now call the Wright room in recognition of the family that owned the building between 1935 and 1990. This room was originally an apartment during the depression. It was later used by Ontario Office Outfitters as a business machine repair shop. Today it functions as a meeting and workshop space with a computer training lab. It is also a unique room with hardwood floors, and six ten foot windows. For the past 10 years Ken Westhues has used this room as his main classroom for teaching his University of Waterloo courses at The Working Centre. The small room on the side, at one time a kitchen, has served as an incubator room of sorts. K W LETS (now BarterWorks) started in this office as it developed its bartering system. In the last couple of years Geeta has used this room as her base for developing the ideas behind the Housing Dialogue. Angie has used that room to develop our Urban Agriculture plans. It is important for an organization to have quality space that can be used for new idea development.

The revitalization of 58 Queen has taken shape over nearly 20 years. It stands as a model for mix use development that has been recreated over this time using the energy and commitment of so many people excited by the prospect of community resource centre in the heart of the Kitchener downtown.

Safe Supply Program Referrals
Safer Supply Program Available in Kitchener-Waterloo The Safer Supply Program is an extension of the traditional...
Worth A Second Look is Open Starting July 21!
We are so excited to see you again! As we re-open we continue to follow Public Health guidelines including wearing...
Recycle Cycles is Now Open By Appointment!
We want to share with you the exciting news that Recycle Cycles is re-opening today, Tuesday, July 20th. We are...
June 2021 Issue of Good Work News
The June 2021 issue of Good Work News features articles on... Updates to our University Avenue project Updates to the...
Job Posting: Night Shift Supportive Housing Worker at The Working Centre
Are you someone who is attracted to the philosophy and action of The Working Centre & St. John's Kitchen? We are...
END_OF_DOCUMENT_TOKEN_TO_BE_REPLACED