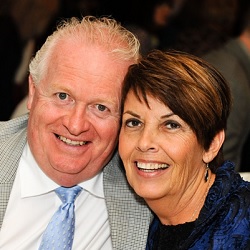 If you have ever attended the annual Mayors’ Dinner, you know who Neil Aitchison is. The long-time host has emceed 24 of the past 29 Mayors’ Dinners, with his big smile and affable charm and is one of the major highlights of the yearly event. But it will be different this year at the 30th Annual Mayors’ Dinner. Neil will be the Guest of Honour, celebrated for his many years of community contributions.

Public speaker, advertising sales rep, actor, comedian, radio host, marketing executive, community booster, husband, father, grandfather and all-around funny guy are among the many roles Neil has taken on. He has been an active Rotarian for more than 35 years with the Kitchener Westmount club. He received Queen’s Jubilee Medals in 2002 and 2012 to recognize his community work at home and abroad, and last year was named KW Citizen of the Year. As his Mountie alter-ego character Archibald F. Inskter at Drayton Entertainment, he’s entertained audiences for years.

The third of five children in his family (and “the only redhead”), Neil was born in 1947 in Harriston, Ont. He had a happy childhood, and he learned the virtues of hard work early on, helping out at his uncle’s farm from the age of 10, and working at Canada Packers at 16, making ice cream, cheese and powdered milk.

During his time at Conestoga College, Neil’s ability to win people over with his genial nature resulted in him being elected class president, not once but twice. He even had to miss the campaign second time around, because he was on assignment at a radio station out of town. He based his campaign on the slogan “I promise nothing” and garnered 87 per cent of the vote. The Conestoga Students Association arranged four annual scholarships in Neil’s name.

As the first Conestoga Graduate (in alphabetical order) in 1970, travel beckoned again, as Neil and a group of friends chartered a plane and arranged a tour around the United Kingdom and Europe. Returning to Canada, Neil got a job at CKKW/CFCA in media sales. Before working fulltime he served as a CKCO-TV news reporter. For 14 years, Neil played Santa Claus on the locally produced Romper Room TV show’s nationally broadcast Christmas special.

Neil declined broadcasting opportunities in Wingham and Barrie and stayed in Kitchener-Waterloo to go into ad sales because he saw a solid future in it, and it allowed him to play to his strengths. “The secret to sales success,” he says, “is all about relating to people, and listening.” He was also the first college graduate that the station hired on the team, and within a few years became the number one sales rep. He was eventually promoted to general sales manager.

One success story Neil is fond of relating was about the Hi-Way Market account. The department store’s owners spent most of their advertising budget on print and TV. But Neil wanted to convince them of the immediacy of radio as a medium. He convinced them to try an ad for snow shovels, which would not be aired until the first storm of the season. Through a not-quite accidental error in the script, the price of the shovels was misstated to be at a huge discount. When the ad aired on the day of the storm, the store sold over 1,000 shovels. Having seen the power of radio advertising, the company became a regular client (and forgave Neil for the “error” in the shovel price, which he made up by crediting the company on some future ads).

Neil and Helen (whom he often refers to at his speaking engagements as his “first wife”) recently celebrated their 45th anniversary, and have a daughter Tammy and son Todd, and four grandchildren, Patrick, Rebecca, Tanner and Brier.

Neil also acts as MC and guest speaker at countless local events. He still does about 40 events per year. Among the many groups he’s been involved with are Sleeping Children Around The World, United Way of KW and Area, Waterloo Region Home Builders’ Association, Western Ontario Athletic Association, KW Oktoberfest, Cambridge Chamber Business Awards, all sorts of Rotary, Probus and one-off community events. One such event was a spaghetti dinner to raise funds for a wheelchair van for the daughter of a co-worker. Melloul-Blamey kicked it off with a $10,000 donation; Neil and fellow employees engineered raising the rest of the money. He also served as a member of Conestoga College Board of Governors, was a Grant Review Team member of the Ontario Trillium Foundation, and was a Board member of the Ontario Pharmacy Council.

Even though there are so many other events, the Mayors’ Dinner is special for Neil. It “has a very warm place in my heart,” he says. “Though it’s very much the same every year, it’s also different, because of the people being honoured, people who’ve really made a contribution. As far as I’m concerned, it’s THE community dinner of the year. The incredible team at The Working Centre have built a model which could be emulated by every community in Canada.”

Back to Mayors' Dinner Guests of Honour

Updated July 7/2020: Free Income Tax Clinic at The Working Centre
This year, The Working Centre is operating a drop-off only Free Income Tax Clinic.  People are eligible to acess this...
June Issue of Good Work News
The June issue of Good Work News is a Special Issue on Rethinking the Growth Economy and features articles on... Mayors...
Working Centre Closures
As of Tuesday March 17th, The Working Centre will be limiting public access spaces across our network of projects in...
Welcome to the 2020 Virtual Mayors' Dinner
Dear Friends, For the first time in 33 years we cannot gather for the Mayors' Dinner because of the COVID-19...
Updated: Humanities 101 Free University Course
Update - Due to COVID-19 Humanities 101 will be an online class this year. We are still receiving applications for the...
END_OF_DOCUMENT_TOKEN_TO_BE_REPLACED