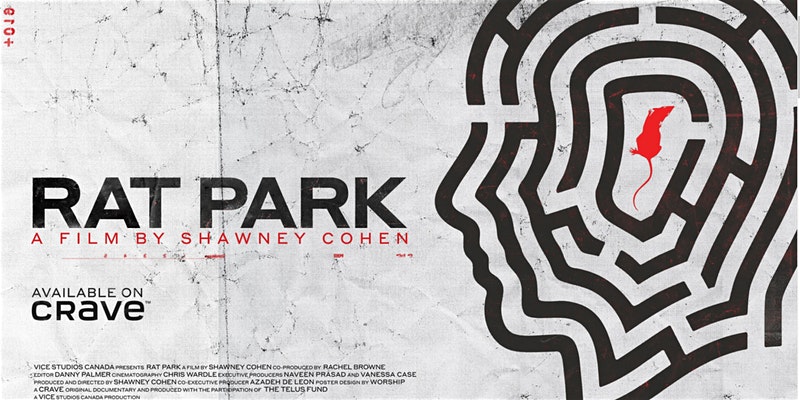 Could the secret to solving the world’s drug crisis lie in a forgotten Canadian psychology experiment from the 1970’s involving rats and heroin? Following three stories on opposite ends of the world, Vice Studios’ Rat Park, a new Crave Original Documentary from director Shawney Cohen, examines the complex issue of drug laws and addiction, exploring why the problem may not be about the drugs themselves, but the environments we live in.

The film draws on the conclusions of Alexander’s experiment by exploring how we ended up in the worst overdose crisis in history, and how it’s perpetuated by ineffective drug policies around the world. Drawing on original footage from Portugal, USA, Philippines, and Canada, Cohen says “The radical difference between these places and their drug policies shows how the Rat Park experiment plays out in real life. You can’t deal with drug crises independently of people’s environments and their socioeconomic situations.”

Join us for this fascinating and provocative free film + forum alongside Director Shawney Cohen, co-producer and journalist Rachel Browne plus local guests.

Safe Supply Program Referrals
Safer Supply Program Available in Kitchener-Waterloo The Safer Supply Program is an extension of the traditional...
Worth A Second Look is Open Starting July 21!
We are so excited to see you again! As we re-open we continue to follow Public Health guidelines including wearing...
Recycle Cycles is Now Open By Appointment!
We want to share with you the exciting news that Recycle Cycles is re-opening today, Tuesday, July 20th. We are...
June 2021 Issue of Good Work News
The June 2021 issue of Good Work News features articles on... Updates to our University Avenue project Updates to the...
Job Posting: Night Shift Supportive Housing Worker at The Working Centre
Are you someone who is attracted to the philosophy and action of The Working Centre & St. John's Kitchen? We are...
END_OF_DOCUMENT_TOKEN_TO_BE_REPLACED