The Story of Biodiesel in the village of Kinchlingi, India

Kinchlingi, a 16 household village in the state of Orissa in India, has been producing its own biodiesel since November 2004. The village biodiesel production facility is operated by volunteers organized through the village council, supported by a bare-foot engineer trained by NGOs promoting this biomass based energy system. Biodiesel is produced in 5-litre batches, roughly one batch a week. Since May 2005, this biodiesel has been used to run a 100% biodiesel pumpset, for daily filling-up of a 9,500 litre overhead tank in Kinchlingi. Five (5) litres of biodiesel is all that is required each week to run the pump 45- 60 minutes a day, to provide running water to 73 Kinchlingi residents, at approximately 70 litres per person per day. (The government of India norm for provision is 40 litres/person/day; per capita water consumption in cities and in the west is several times higher.) 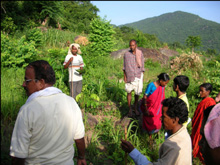 Absence of electric grid connection in 90% of rural villages of indigenous forest communities like Kinchlingi is a major obstacle to Gram Vikas, a local NGO, realizing their mission of “providing basic water supply and sanitation, infrastructure, capacity building and equitable access to secure livelihoods” to at least 1% of Orissa’s population. While Gram Vikas has already covered over 12,000 households (over the last 14 years since programme inception in 1992), the target is at least 100,000 households by 2015 through its Rural Health and Environment Programme (RHEP).

Villages like Kinchlingi, often in the news for droughts and famines, are in desperate need for infrastructure infusion and ecosystem regeneration to reverse large-scale deforestation in the aftermath of illicit timber logging and prevalent shifting agriculture practices (swidden, locally called bogodo). Being remote villages there is no value addition to forest produce or even to agricultural produce such as niger (Guizotia abyssinica), a traditional crop that is exported to western countries through (exploitative) middlemen for use as bird feed.

A Canadian NGO, CTx GREEN (Community based technologies exchange, fostering Green Energy Partnerships), has partnered with Gram Vikas, an Indian NGO with 27 years experience in Orissa, to address these challenges. Kitchener-based CTx GreEn, armed with an award from the World Bank Development Market place 2003, is targeting a biodiesel based water pumping program in four (4) village communities, Kinchlingi being the first and Kandhabanta-Talataila being the second. The objective is to provide water supply and sanitation services through a bio-energy system that promotes regeneration of the land and helps create local economic opportunities. Biodiesel-fuelled pump-sets (3.5-5 HP) and small-scale power generation sets (2-3kW) are being set up, along with pedal-powered grinders for oil seeds (and grains), handoperated oil presses and pedal-driven biodiesel reactors. Vegetable oil extracted from locally grown (and native) oil-bearing crop(s) will serve as feedstock for conversion into biodiesel. Absolute alcohol (methanol or ethanol) and lye (sodium or potassium hydroxide) are reagents/catalysts required to convert vegetable oil into biodiesel.

Starting from scratch, CTx GREEN has put together decentralized biodiesel production facilities in two remote villages providing running water to the village community using biodiesel. Villagers are trained to follow standard operating procedures and biodiesel making recipes developed at the pilot plant and biodiesel laboratory the Gram Vikas campus in Mohuda, also in Orissa. The pilot plant and lab were set up in Feb 2004 for design, testing and development of machines as well as processes, and to train villagers. Samples of biodiesel produced in the villages are sent back to the Mohuda lab for quality testing and control. Testing and performance monitoring of diesel engines (pump sets and gensets) are ongoing along with exploratory discussions with engine manufacturers to ensure warranty coverage.

A multi-faceted participatory assessment of (community) needs and resources has been carried out to prepare for a much more holistic installation of the next two sets of machines. Baseline information has been established in areas surrounding two selected clusters of villages in the hills of Tumba, combining remote sensed satellite image analyses with forest, ethno-botanical, and livelihood assessments, so that longer-term impact of biodiesel related activities could be monitored and strengthened.

A few oil-bearing trees have been identified as locally underutilized species: mahua (Madhuca indica) and karanja (Pongammia pinnata), kusuma (Schleichera Oleosa); cultivation of niger (Guizotia abyssinica) and castor beans (Ricinus communis) in agricultural land and kitchen gardens has begun, to supplement oil seeds collected from forests. Preliminary biodiesel recipes have been developed for a few of these local oils; further optimization for 5-L batches is ongoing. 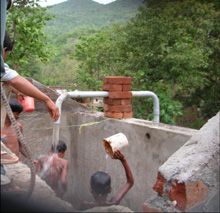 CTx GREEN is lobbying for policy changes to legally allow extension of customary privileges enjoyed by tribals (to brew alcohol for personal consumption rather than sale) to all biodiesel villages with the added endorsement to further purify the distillate to biodiesel-grade absolute ethanol. Future R&D will include scaling up of a firstof- its-kind, lab-validated, low-energy process for ethanol purification that will process the crude tribal distillate into biodiesel-grade ethanol. Production of lye (the third ingredient required for biodiesel making) from local wood ash is also planned; wood ash being sourced from waste product of the tribal distillation process The aim is to move towards the use of 100% local raw materials and labour, thereby maximizing inputs into the local economy, and minimizing cash outflows to purchase essentials from external sources. Training local village youth as barefoot engineers for technology-support to the women’s groups operating and managing the biodiesel unit in the villages has begun in a small scale. The goal is to increase the number of trained bare-foot biodiesel engineers, as ambassadors for replication in other villages.

A direct measure of the success of the project is the availability of piped water in un-electrified villages. The other benefits include several new livelihood opportunities. Technology is only one among several other factors that we consider important for project sustainability. It is the premise of the project that this technology can lead to land regeneration and will strengthen local level institutions at the village level. Three different community management models have emerged from village-level preferences and socio-enviro parameters that (in conjunction with the usual techno-economic parameters) will ensure sustainability are being assessed. Working capital requirement is emerging as an urgent need that requires financial support; funding is also required to continue the ongoing training and development needs.

CTx GREEN would like to develop the pilot plant, biodiesel lab and needs/resource assessment and ecosystem monitoring unit into a centre of excellence in biofuels based livelihoods, offering action-oriented research support to the field NGOs, facilitation of installation and commissioning of new biodiesel units including South-North trainings and exchanges, micro-energy R&D, and other collaborative partnerships. With only a small core of full-time staff, which has ranged from two to five, CTx GREEN has built up a group of competent professionals anchored in Gram Vikas, the local NGO. Other required core competencies have been tapped on an as-needed basis from a pool of key resource people comprising engineers, ecologists, agronomists and taxonomists. The University of Waterloo and the University of Berhampur, Orissa, have also been partners at specific stages of the project. The scale-up strategy of CTx GREEN is “to stay small ourselves and yet maximize the Growth of Impact (of our work) by leaving behind ‘our shadows’ in partner NGO’s who will carry-on the work long after our ‘exit’.”